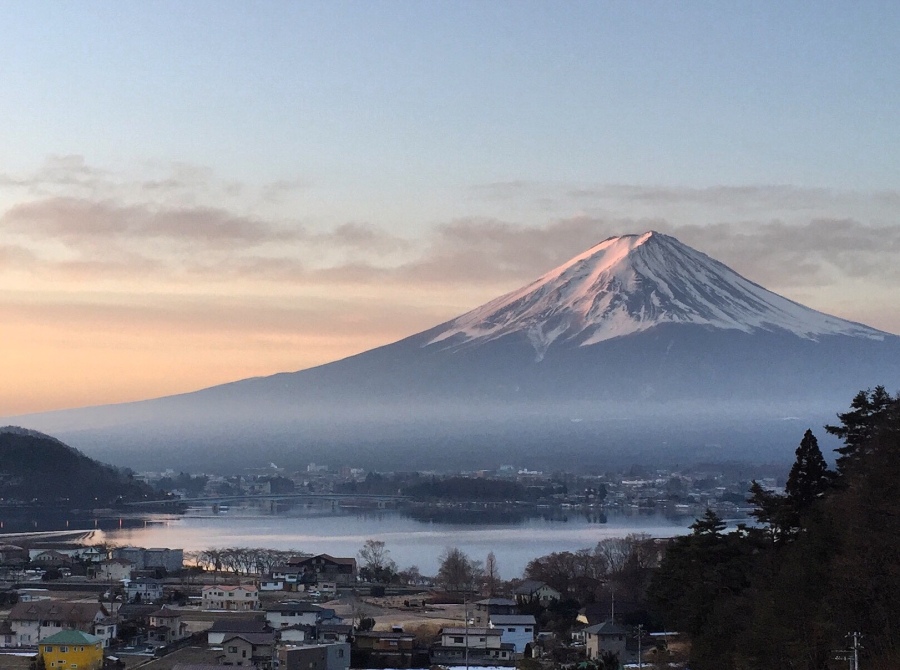 So a few months ago a pretty big decision was made, and as I sit here looking out over a pink Fuji, sunrise spilling over the mountains and reflecting off the snow, I can’t help but think on it.

That decision was to re-contract in Japan, putting off our permanent departure from this coming summer to August 2019. We ahhhhed and uuuumed for months, made lists of pros and cons, and had trailing discussions that ended with comfortable distractions. Nothing was resolved, but all that hot air had to go somewhere, and so up it went, into a looming cloud of existential uncertainty, always present and decreasingly easy to turn away from.

But we kept on turning away. Right up until the point where we couldn’t. After spending two weeks at home, worry cloud softened by Christmas lights and food and wine and family, we came back to Japan to the deadline smack in our faces, cloud so ever-present I constantly felt as if I’d forgotten something.

And so we folded. No grand decision to be adventurers or see the world or to bravely buck the system that we’re supposed to adhere to (house, car, kids, dog etc). No. We caved and re-contracted because the idea of leaving Japan, a steady salary and a four-day-week job turned out to be terrifying. So much for subverting the system, it seems like we’re very much part of one.

And what’s so wrong with staying in Japan?? I hear you. I hear you. The quality of life here is pretty good, and thanks to low inflation, our spending power is also pretty damn good. The people are, for the best part, friendly and the culture is interesting and there are a lot of opportunities to get involved. It’s a nice life, if you’re good at dealing with cultural differences, don’t mind being stared at, and learn some Japanese, then it’s pretty great.

So why are we stopping and thinking so hard about leaving? Because living here is like being in a suspended reality; fun and interesting but also loaded with a thick sense of living whilst time remains suspended elsewhere. But the thing is, it hasn’t. The lives of my family and friends back home are still happening. Marriages, babies and illnesses have all happened. And as someone who has been living in a different country to my family for over ten years now, there is only so much of this you can be absent for and not start to question why.

And there’s the suspension of professional development. At best ALTs are junior teachers, and at worst we are glorified CD players, sometimes left to sit on a shelf at our desks, unused for weeks. There isn’t much scope to develop past a certain point but there is a lot of scope to take on more mundane work. And you can bet that’s what you’ll get. Don’t get me wrong, I work hard, I put in extra for my students, and really thrive from the time I spend with them. But there is very little scope for an ALT to develop, and the job market outside of being an ALT for foreigners is restricted to working in software, unless you have native level Japanese.

Then there’s the fundamental reason I don’t want to remain. That secret little wish I didn’t realise I had, until recently. A desire to be challenged, to live a life where I can be paid to create the arts I love. (There, I said it. I’m one of those fools.) I want to achieve more than simply having lived in Japan. Of course, I want to see other countries but, above all, I want to be challenged to create.

Being an ALT isn’t going to bring any of those things, even though the things it may bring are truly humbling. So why am I writing this post? Am I trying to prove to myself what I think? Am I trying to make some headway towards the right decision? Or being unfathomably privileged?

Sitting looking out over Fuji, surrounded by a quiet little hamlet, still dark in the shadows of the mountains, where the rising sun can’t quite reach yet, it’s easy to realise the beauty of this country, of its people, and everything they’ve shown me, and given me. The air is frosty, and my breath puffs out in clouds around me, street lights are just starting to switch off. But all of this beauty doesn’t mean that staying is the right decision. Staying a fourth year was decided out of a fear of change, and if it weren’t for having zero savings (and zero debts) I would be reversing the decision right now. But I have to be practical, at least a little bit.

Downstairs at breakfast, my parents ask me if I’ll stay a fifth year, my mum is only a little incredulous. No, I say. A bit too quickly.

So, for better or worse, Joe and I are leaving Japan in August 2019.

2 thoughts on “Where do we go from here?”

© Denica Shute and Mapping Lanes, 2016~. Unauthorized use and/or duplication of this material without express and written permission from this site’s author and/or owner is strictly prohibited. Excerpts and links may be used, provided that full and clear credit is given to Denica Shute and Mapping Lanes with appropriate and specific direction to the original content. Your cooperation for artisitic licence is appreciated.